Bunch-O-Balloons is an electric party pump that inflates up to forty 12-inch latex balloons within 40 seconds. These balloons are available in a variety of colors with pre-attached ribbons. The electric pump can inflate 8, 16, or 40 balloons at a time using helium or air.

Unfortunately, Bargain Balloons does not sell this product.

Bunch-O-Balloons are sold in groups of eight and are attached using strips of tubing. To operate the party pump insert each section of tubes into the slots and turn it on for 40 seconds to inflate balloons.

Once balloons inflate, cut the inflation tubes as close to the neck of the balloon as possible. Bunch-O-Balloons were designed with a one-way valve, so air does not escape.

If you plan to reuse the balloons then do not cut the tubes or else they will not be able to re-inflate.

To use a helium tank or an air compressor, simply attach the adapter onto the tank's outlet and insert the plastic tubes into the adapter. Unfortunately, you can only inflate eight at a time with this method.

Bunch-O-Balloons are not recommended for making arches, walls, garlands or any structure that requires duplets or quads because the plastic tubing and valve will not allow for the balloon neck to be manipulated. 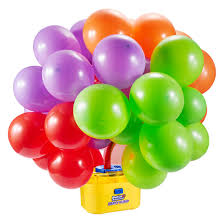